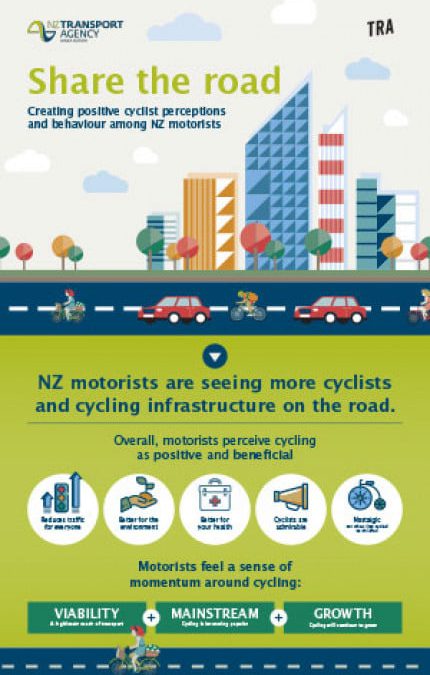 After our chat with George, we got to thinking.. how do we change the prevailing attitudes surrounding cyclists? Turns out we are not the only ones thinking about this and there has been much research conducted on the subject. The New Zealand Transport agency published their study in October 2017 and it had some interesting findings.

While 66% of the cyclist population associate themselves most closely with a leisure or casual cyclist, motorists report observing group, road or fast cyclists most frequently on the road. This makes sense when you consider that road and commuter cyclists cycle most frequently. However, while road and regular commuter cyclists are on the road more often than other cyclists, road cyclists disproportionately dominate motorist perceptions of who is on the road. This may be because seeing road cyclists is a more highly emotionally charged event. Despite a shift away from the road and commuter cyclist in recent years, this behaviour has not been normalised yet. Strong perceptions of the typical cyclist still exist and conjures up specific perceptions and imagery of a cyclist.

It’s not all bad news though. Motorists are observing positive behaviour on our roads, especially when it comes to allowing for space between driver and cyclists. Importantly, cyclists are generally seeing the same positive behaviour. We are seeing some positive cyclist behaviour already, however more inconsistency exists, especially around considerate behaviour, rules and communication. This inconsistency is leading to some resentment towards cyclists.

Almost a quarter of our motorist population feel negative towards cyclists in general. Much of the negativity around these cyclists is created by the fact that they are often seen riding in “entitled” packs or chatting nonchalantly in pairs, which block roads. This negativity can be projected on to solo road riders (and indeed all cyclists). Negative behaviours by motorists towards cyclists are observed regularly on our roads. These observations fuel anxiety and safety concerns and ultimately contribute to the barrier of people getting out of their cars and cycling on the road.

How do we drive positive behaviour and ultimately influence attitudes? It makes sense for everyone if there is a shared goal to increase the number of people choosing to travel by bicycle. This means less congestion on roads and a cleaner environment for everyone. Achieving this requires improving the safety of those who travel by bicycle. Normalising mainstream cyclists is important to equalise cycling as a legitimate mode of transport. There is a small but significant out-group of cyclists that the average New Zealander finds unrelatable and that is driving negativity towards cycling in general. Most cyclists are just one of us, they’re human and genuinely have a mutual respect for others on the road. This means we must humanise and personalise. Social norming will have an extrinsic effect on empathy and respect for those sharing the road. We also need to bring clarity to the rules and expected behaviour for everyone on the road, both cyclist and driver.

The Safer Cycling Foundation has made a commitment to changing the attitude of motorists toward cyclists and cyclists toward motorists. In the coming weeks we will aim to give clarity on the rules for cyclists to ride responsibly and share the roads. We will highlight the responsibility of drivers toward cyclists when sharing the roads – the emphasis here must be on sharing the roads. We will work toward putting a face on the average bicycle rider and we hope to add to the shift in attitude that a majority of cyclists are just like everybody else, trying to get where they are going, in a responsible and respectful manner.