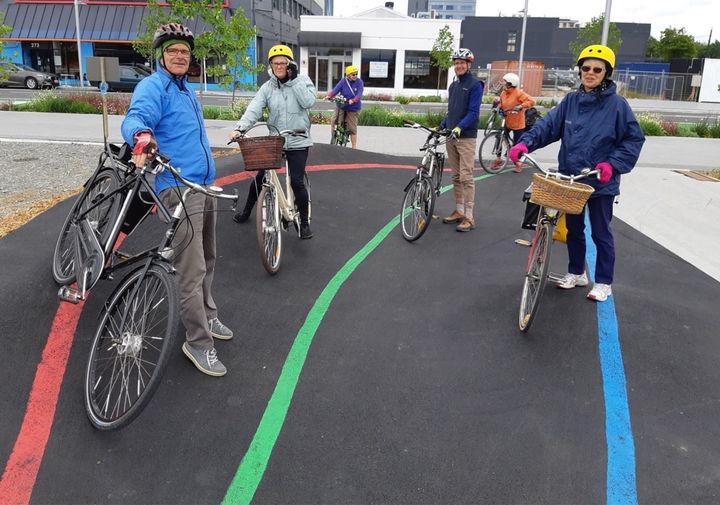 At The Safer Cycling Foundation, we firmly believe cycling is important for a variety of reasons; environmental, physical health and mental well-being crop up frequently. We have found a group that not only demonstrates the truth of this, but also took the time to show us how much more cycling provides to their members.

Wednesday Wheelies is a group of pleasure cyclists who have been meeting for 4 years. The group began 5 months after the Papanui Parallel Major cycle way was opened. The St Albans Resident’s Association, who had been involved with the consultation process, invited anyone who wished to attend along for a ride on the cycle way. The ride was successful enough that it was repeated every two weeks gradually incorporating other cycle ways in the city. After three years, the ride frequency changed to weekly.

The group has a varied demographic with a significant number of riders approaching their seventies. We spoke to founding member, Robert Fleming, who told us, “For many the ride is their social highlight of the week. For others, it is an opportunity to ride socially for a change as they may ride on other days alone. Friendships have been made. In times of health adversity for some, there has been support. People care and look out for each other. Some ride with other groups but keep returning for the friendliness.”

The group caters to everyone and acknowledges there are varying levels of fitness and motivation. A recent survey indicated that 50% of the members came along for the social aspect pf the group while the other 50% enjoy exercising in the fresh air. There is a range of competencies, from the experienced road cyclist to the slower and careful everyday cyclist and the group rides to the pace of the slowest, ensuring they stay together.

We had a lot of questions around how the group maintains safety for its members and other road users. We were delighted to hear that in four years the Wednesday Wheelies have not encountered any serious issues with motorists apart from the very occasional close pass or impatient honk. Robert tells us that 99% of the time everything is fine and that the majority of traffic behaviour is exemplary!

For safety though, Robert says route planning and communication of the route is key. Group numbers are kept small, with the addition of a new group soon, they will reduce to 12 riders. Difficult intersections, arterial and long straight roads are avoided where possible. There are safety guidelines circulated, plus a very short ride briefing of possible issues on the route, given before the groups set off. Ride leaders are conversant with the route they lead, which is crucial to group safety.

We asked Robert how important the Christchurch Major Cycle Routes was to the group, he had this to say, “Absolutely everything. This group would not exist without them. It would be much too unpleasant for a start, probably unsafe as well. It is like going for a walk in the park, you go there because it is enjoyable, our cycle ways enable that type of relaxation. They enable us to enjoyably have access to a combination of reserve paths, the Red Zone, quiet roads along the river and some empty residential streets to form routes that are always pleasant.” These cycle routes mean that the routes traveled by the group are varied, going to every suburb in the city. Part of the attraction is a re-discovery of the city that many had not thought possible. Members often comment, “I’ve lived here for over 30 years and never been there!”